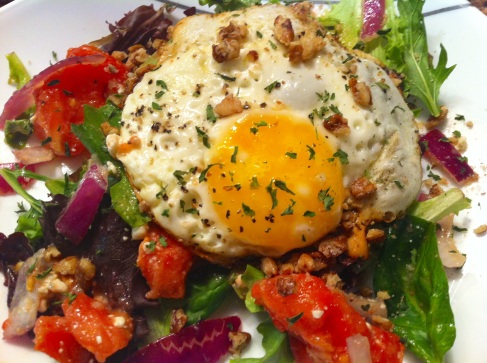 I had the most unusual craving tonight. I was craving a fried egg on a salad. Strange, I know. I don’t ever remember seeing one before, but it just flew into my head as I was getting ready to prepare dinner. I had already marinated some locally-grown heirloom tomatoes and red onions in oil, red wine vinegar, garlic, dab brown mustard, salt, pepper and a dash of sugar. I decided to toss some lettuce in with it, threw in some bleu cheese crumbles and added some of my candied pecans I had leftover from another recipe earlier in the week. Then, it was simply a matter of frying an egg and placing it on top. It was runny; it had to be. That’s what I was craving. Good grief, someone help me… LOL. The verdict is that it is FABULOUSLY delicious. My teen daughter gives it two-thumbs up. Yay.